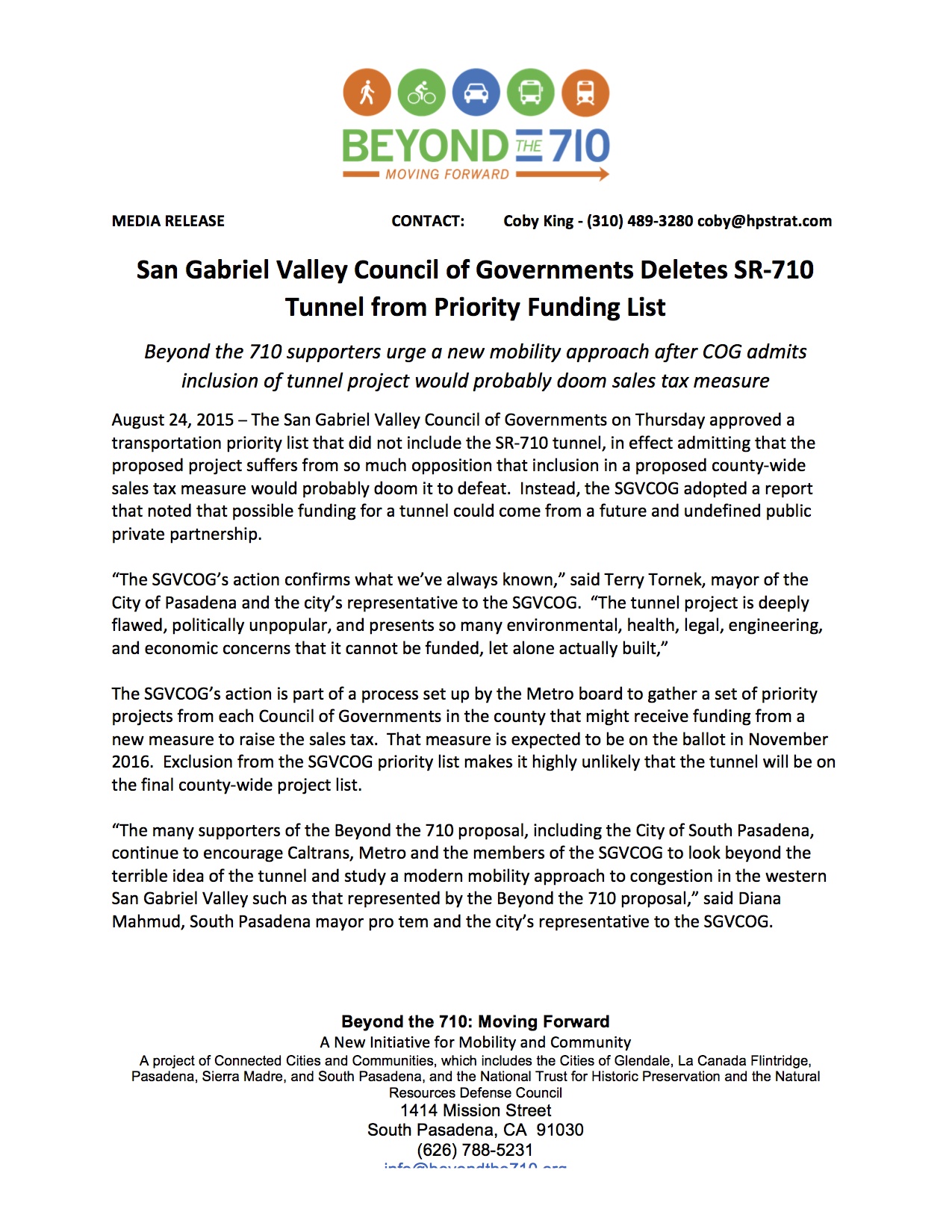 MEDIA RELEASE - Beyond the 710: The 710 EIR is Fundamentally Flawed, and Should be Scrapped and Replaced with a New Community Process Based on Modern Mobility Thinking

Beyond the 710:  The 710 EIR is Fundamentally Flawed, and Should be Scrapped and Replaced with a New Community Process Based on Modern Mobility Thinking

August 5, 2015 --  Beyond the 710, which in May released a much-discussed proposal to solve the congestion and mobility problems in the western San Gabriel Valley without the destruction and disruption that would be caused by a freeway tunnel, has transmitted its formal comment letter to Caltrans strongly criticizing the draft Environmental Impact Report (EIR) and calling for the consideration of Beyond the 710’salternative proposal.

“The letter we are submitting today conclusively demonstrates that the 710 EIR is fundamentally flawed, that the tunnel is a terrible idea, and that the EIR itself is biased toward the tunnel alternative,” said Ara Najarian, mayor of Glendale, member of the Los Angeles County Metro Board, and chair of Beyond the 710.  “Caltrans should scrap this process and evaluate community-based alternatives such as the Beyond the 710 Proposal which will better serve the affected communities and relieve congestion.”

The letter makes the following points:

1)    The project purpose and need statements are fundamentally flawed;

2)    The project’s study area is too narrowly defined to allow for regional transportation solutions;

3)    The analysis is biased to favor the tunnel alternatives;

4)    The analysis is highly segmented, resulting in inadequate review of cumulative impacts;

6)    The tunnel would benefit only a select few, and only by a small amount;

7)    The proposed freeway tunnel alternatives have the potential to damage irreplaceable historic and cultural resources;

8)    Regional traffic would not be improved as a result of the tunnel; rather, it would merely shift congestion;

9)    The tunnel would make arterial traffic worse along certain streets in Alhambra and Rosemead;

10) Traffic would get significantly worse on various connecting freeways as a result of the tunnel, in part by inducing extra driving;

11) Most traffic isn’t long-distance, meaning the tunnel is not necessary;

12) The EIR analysis seems to (wrongly) assume an ever-increasing amount of auto traffic on streets throughout the study area;

13) The draft EIR/EIS improperly identifies Measure R, a half-cent sales tax for transportation projects in Los Angeles County, as the key source of funding for the tunnel alternative.

In brief, the comment letter concludes that the tunnels should be removed from further consideration, and other, more sensible, regional alternatives to be developed in consultation with local communities.  In particular, Caltrans should develop and analyze projects such as those found in the Beyond the 710 initiative.  This package includes many worthwhile proposals already developed by Metro.

“As a family physician, I am deeply concerned about the negative health effects a 710 freeway extension would create for many communities if it went forward,” said Dr. Marina Khubesrian, South Pasadena councilmember, chair of Arroyo Verdugo Steering Committee, and vice chair of Beyond the 710.  “The draft EIR/EIS seems to be stuck in 1950s thinking by not bothering to do a health impact analysis, and ignoring the real benefits of a modern multi-modal approach.  The Beyond the 710 initiative, on the other hand, does what this analysis does not: promotes wellness, reduces pollution, relieves congestion, and better connects people to their important destinations.”

The Beyond the 710 Proposal shows that congestion can be relieved and economic development promoted by removing the freeway stubs at both the I-10 and I-210 freeways.  The Proposal has started a robust community discussion about how to bring about a mobility solution that benefits everyone and destroys no one’s community.  The Proposal can be found at http://bit.ly/1hk0o9u.

“We are very encouraged by the amount of discussion the Beyond the 710 Proposal has generated,” said Terry Tornek, mayor of the City of Pasadena.  “It is early in the process, but it’s clear that numerous citizens and cities oppose the tunnel, which (as our comment letter makes clear) presents environmental, traffic, financial, and planning flaws.  Beyond the 710 has generated support and discussion because it proposes a 21st century multi-modal solution including reconfigured and improved surface streets, better community-serving transit that connects people to key destinations and other transit lines, and strategies for increasing walkability and bikeability.”

In addition to Beyond the 710, comment letters against the tunnel project have been submitted by, among others: the City of Pasadena, the City of La Cañada Flintridge, the City of South Pasadena, Senator Carol Liu, Assemblymember Chris Holden, the USC Keck School of Medicine, the Los Angeles County Department of Health, the No 710 Action Committee, the Arroyo Verdugo Steering Committee, the National Trust for Historic Preservation, and the Natural Resources Defense Council.

Beyond the 710’s Plan is the result of many months of study and collaboration to seek solutions that work for all the affected communities.  The effort was led by Nelson\Nygaard, a full-service transportation firm, with offices across the United States, committed to developing transportation systems that promote vibrant, sustainable, and accessible communities.

An Economic Benefits analysis led by The Maxima Group LLC, a principal-led consulting firm specializing in real estate market and economic analysis, is located at www.beyondthe710.org/smart_growth.

Beyond the 710 Coalition, which has released a new alternative that could provide greater congestion reduction to all the affected communities than the tunnel would, at a fraction of the cost, criticizes the Analysis as disconcertingly skewed in favor of the Tunnel Alternative and includes underestimated costs and misleading conclusions

Los Angeles – June 25, 2015 – Beyond the 710, a community effort created to reimagine how to resolve the conflicts over congestion and mobility that have divided the western San Gabriel Valley for decades, blasted the Cost-Benefit Analysis recently released by Metro to support its SR-710 draft environmental impact report as “flawed” and “skewed”.

“We’ve been asking for a Cost-Benefit Analysis that honestly compares the alternatives in the EIR, but unfortunately, the Analysis released recently just continues what appears to be a strategy by Caltrans of putting the tunnel in the best possible light while discounting other alternatives,” said Ara Najarian, mayor of Glendale, member of the LA County Metro Board, and chair of Beyond the 710.  “Essentially, this so-called analysis says that the more a project costs, the more the benefits will be.  Well, that’s pretty obvious, and not the kind of analysis that can help policy-makers see what a dumb idea this tunnel really is.”

Among the criticisms of the Analysis that Beyond the 710 has identified are:

1)    Valuing “Bigness” over anything else by falsely asserting that benefits “are typically examined independently of their relationship to costs.”  In fact, if the alternatives were presented in terms of the ratio of benefit to cost, the results would show that the Transportation Systems Management and Transportation Demand Management(TSM/TDM) alternative provides the best ratio of benefits.

2)    The Analysis inflates the operating costs of the bus rapid transit (BRT) alternative in a way that degrades its cost-benefit ratio.  If the Analysis used the same numbers from the DEIR, the BRT ration would approach the TSM/TDM alternative in performance.

3)    The Analysis appears to adopt a model that values the time of car riders over the time of transit riders, without any explanation, and as a result skews the results in favor of the tunnel alternative.

4)    The Analysis purposely underestimates the cost of the proposed tunnel by half.  Analyses of similar projects, most notably the one for the Sepulveda Pass, are using $1 billion per mile as a budgeting model, yet the 710 DEIR and CBA are using $500 million.  This is another example of how the Analysis is skewed in favor of the tunnel.

5)    The CBA and DEIR have no provision, plan or budget for the anticipated breakdown of the tunnel-boring machine.  The same machine has been stuck in Seattle for over a year and is requiring a four-city block additional vertical tunnel to be excavated in order to free it.  While of course we cannot be sure that the same machine would break down in a similar fashion here (despite geology that is, if anything, more challenging than Seattle’s), the lack of any contingency costs (again) skews the Analysis in favor of the tunnel.  This is most obvious in that the Analysis uses the same discount rate for all the alternatives, which does not reflect the differential in risk among them.

6)    One of the primary concepts used in the Analysis, “Net Present Value,” is an inappropriate measure for public infrastructure projects.

7)    The calculations used to come up with an employment benefit for the various alternatives is directly correlated to capital cost, skewing the benefits to the most costly alternatives. (Again, this is a fundamental problem of the Analysis, in that it unfairly favors “Bigness.”)  Employment benefits are directly correlated to capital expenditures. The disparity in capital costs insures that the higher cost projects will generate more jobs than lower cost alternatives.

“Metro board members and other policy-makers should understand that this so-called Analysis appears to be a continuation of the skewed analysis unfairly favoring the tunnel that was obvious in the EIR,” said Marina Khubesrian, South Pasadena councilmember and Vice Chair of Beyond the 710.  “It appears that an independent study of these issues may be necessary to get an unbiased view of whether this tunnel will be worth its huge projected costs.  Obviously, we believe otherwise, and that instead Caltrans and Metro should study the Beyond the 710 proposal.”

The Beyond the 710 proposal was released on May 28, 2015.  A key insight of Beyond the 710 is to understand that more than 85% of commuters exiting the 710 Freeway at Valley Boulevard are intent on reaching local destinations, and the vision of Beyond the 710’s plan is to use 21st Century planning solutions (such as well-planned transit lines, Great Streets concepts, and traffic mitigation) to reduce congestion and promote smart growth rather than 1960s freeway-oriented approaches.

The Beyond the 710 plan demonstrates that removing the freeway “stubs” at both the 10 and 210 freeways can free up land for smart development, employ transit to connect people to important local destinations and other transit lines, and employ modern strategies for increasing bikeability and walkability.  The plan is available at www.beyondthe710.org/better_alternatives.

Beyond the 710’s Proposal is the result of many months of study and collaboration to seek solutions that work for all the affected communities.  The effort was led by Nelson\Nygaard, a full-service transportation firm, with offices across the United States, committed to developing transportation systems that promote vibrant, sustainable, and accessible communities.

An Economic Benefits analysis produced by The Maxima Group LLC, a consulting firm specializing in real estate market and economic analysis, is located at www.beyondthe710.org/smart_growth. 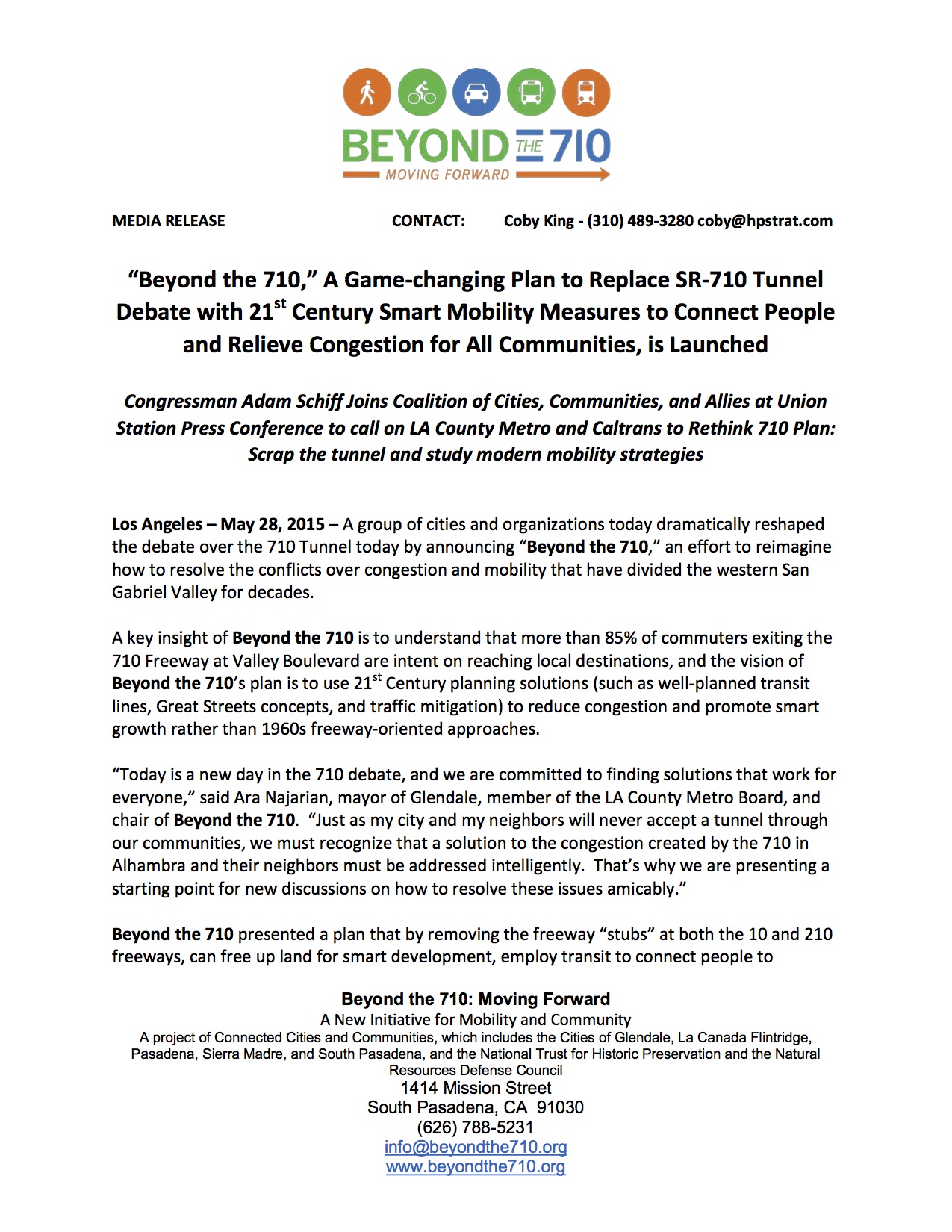 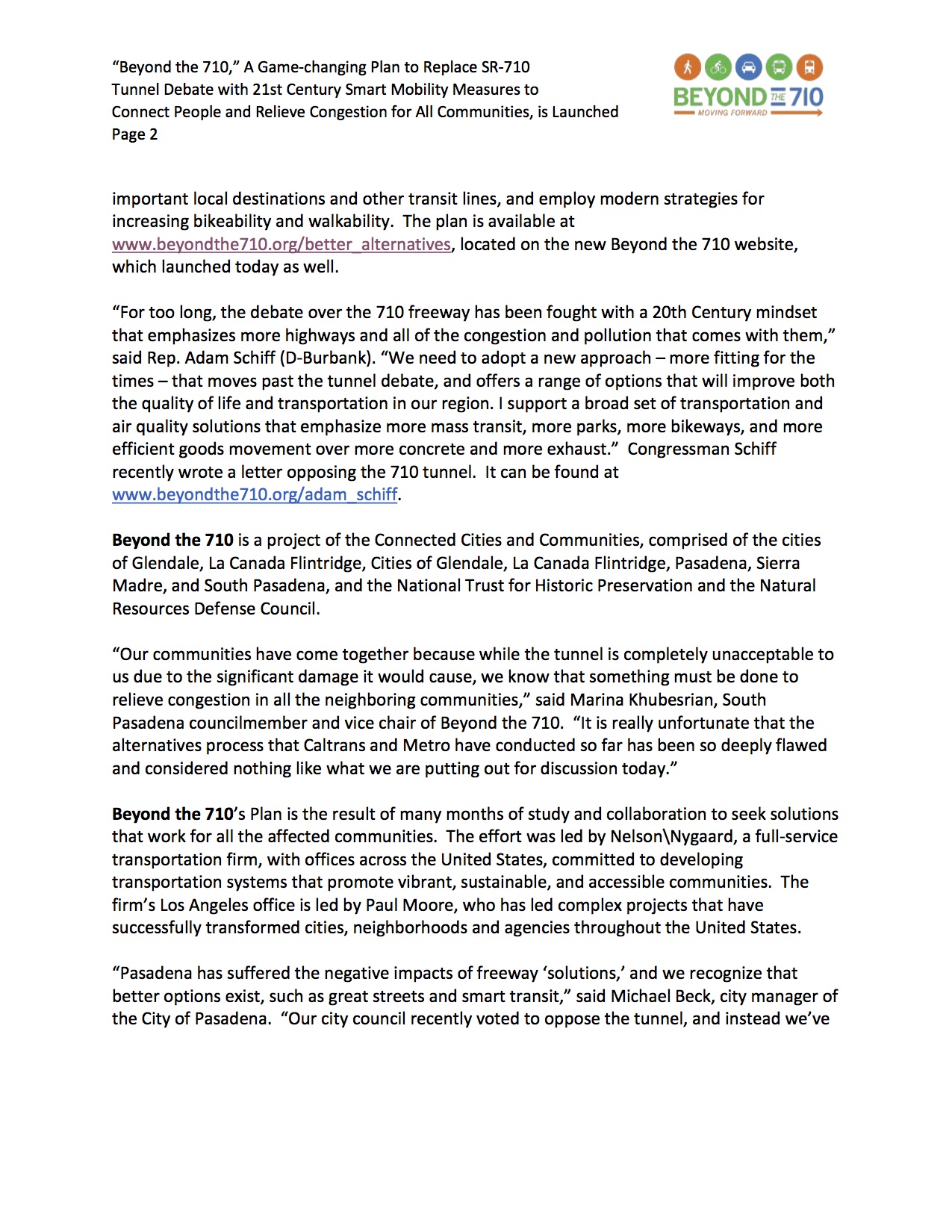 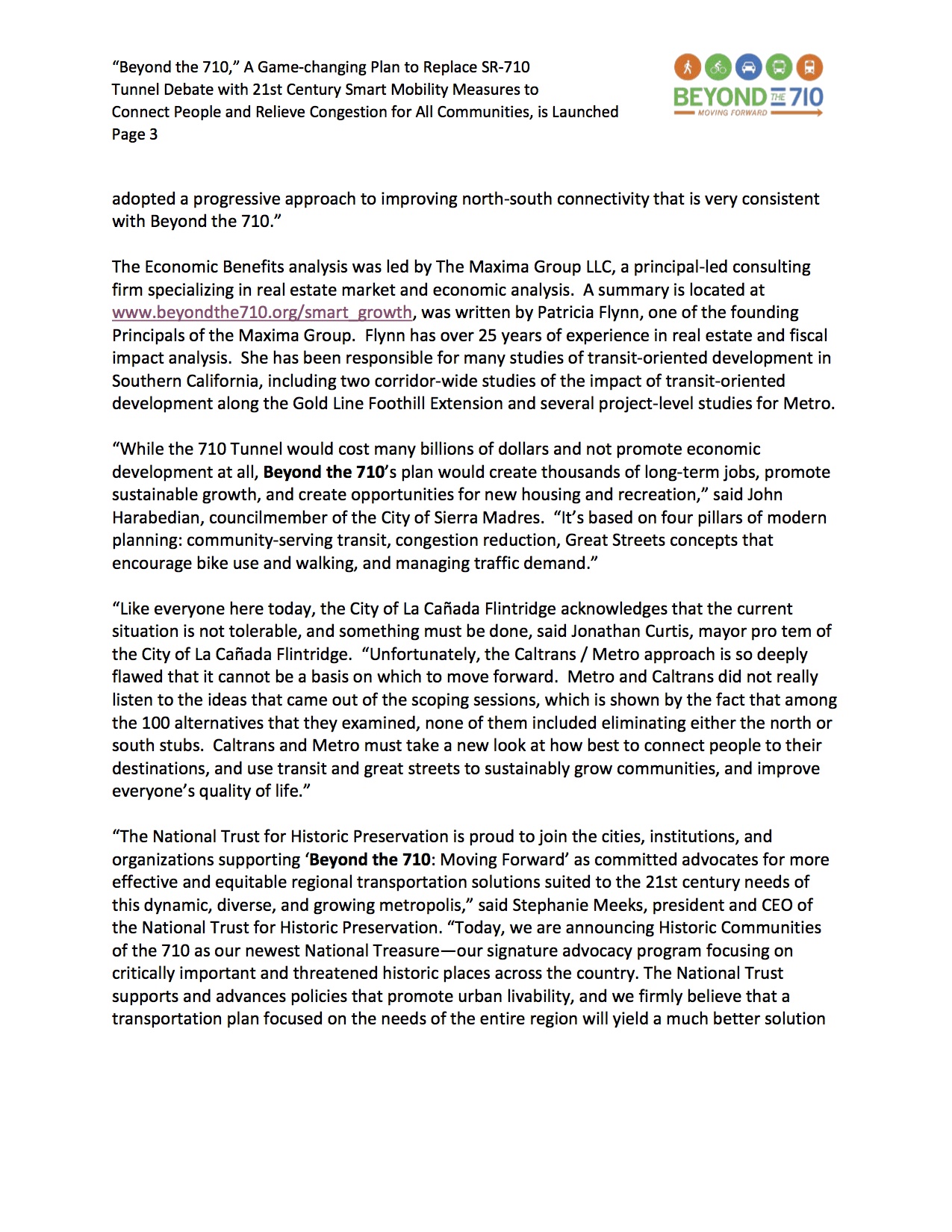 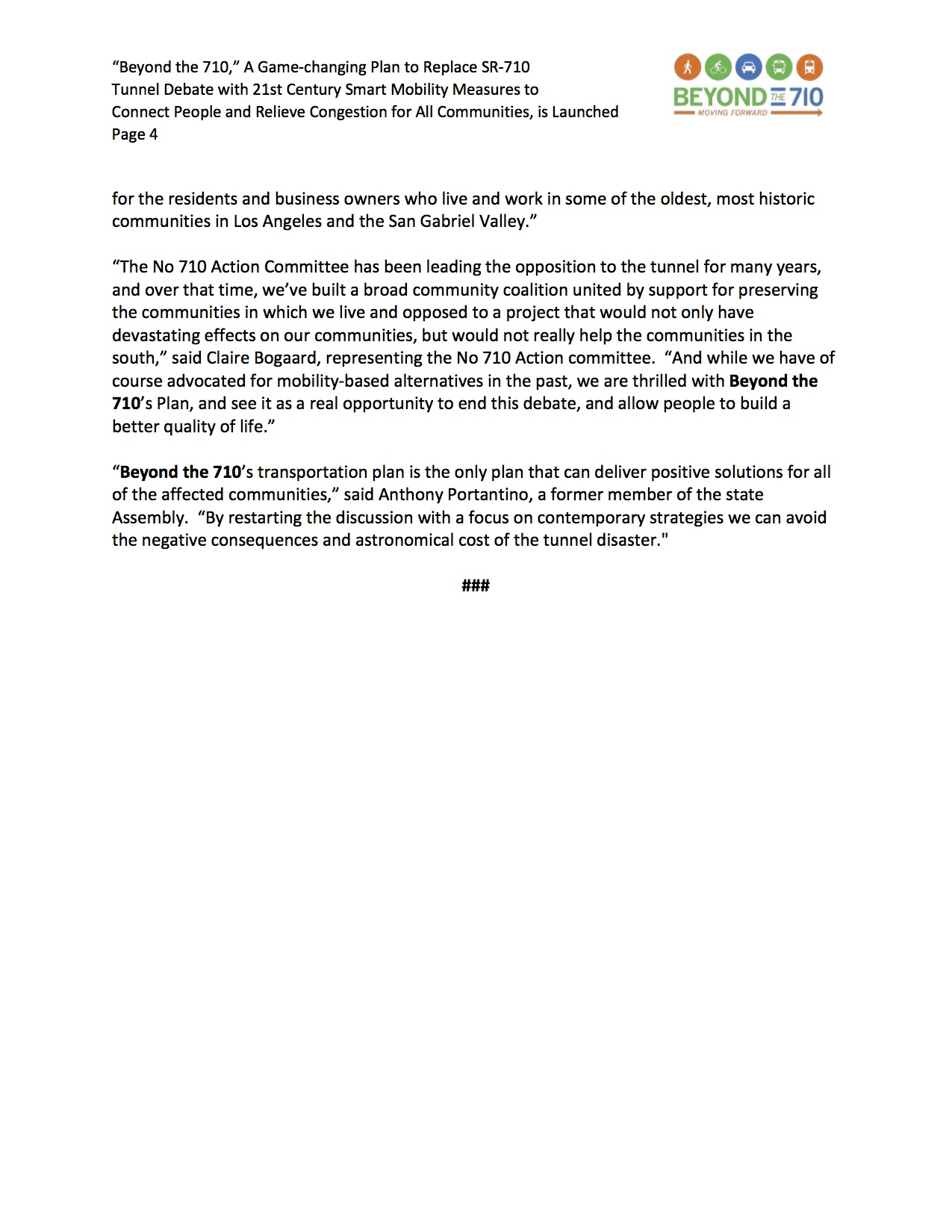